The Trécé BMSB DUAL monitoring lure is a controlled release system comprised of pheromone and inert ingredients that are homogenized and extruded to formulate a controlled release monitoring lure. This advanced formulation technology controls the release from the lure of both components at the same rate over time. Trécé’s lure provides earlier detection and higher capture of BMSB when used in season-long monitoring programs. The long-lasting 12-week lure provides a field longevity that is 2-3 times longer than competitors lures and affords lower maintenance with the lure only needing to be replaced once during the growing season. All are key components critical for effective integrated management of BMSB and season-long crop protection.

This paper explores more about the problem of BMSB, the Trécé BMSB lure technology and why it is important, and finally, provides the published lab and field verification to support the “long-lasting” (12 week), highly effective claims for the Trécé BMSB DUAL lure.

The BMSB pheromone was a crucial discovery and shown to attract males, females, and nymphs (Khrimian et al. 2014). Further studies showed a synergism when the BMSB pheromone (murgantiol) was combined with MDT in baited traps and provides reliable season-long monitoring of both nymphs and adults (Weber et al. 2014). Furthermore, nymphs are less attracted to the pheromone in absence of the MDT synergist (Weber et al. 2014). These two components, murgantiol and MDT, have large differences in volatility due to their chemical structures. MDT is much more volatile than murgantiol and emits faster from a lure if emission is not controlled. Therefore, the release of the pheromone and MDT is best controlled over time when they are loaded in separate lures creating a dual monitoring lure. 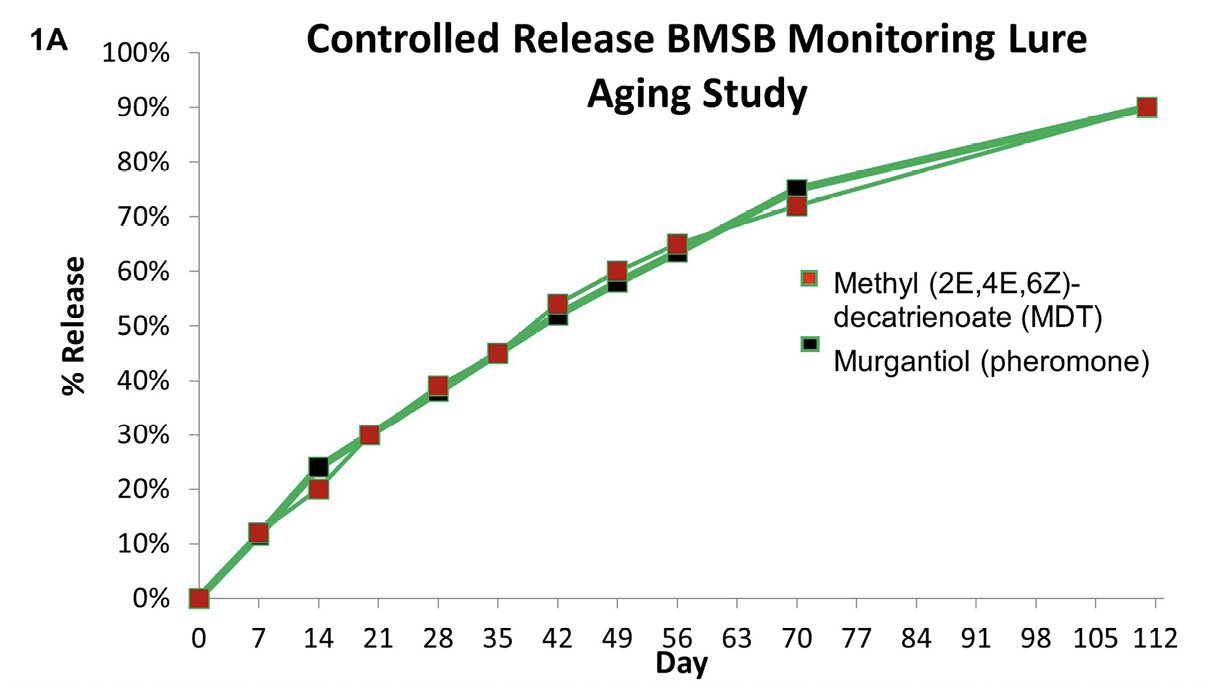 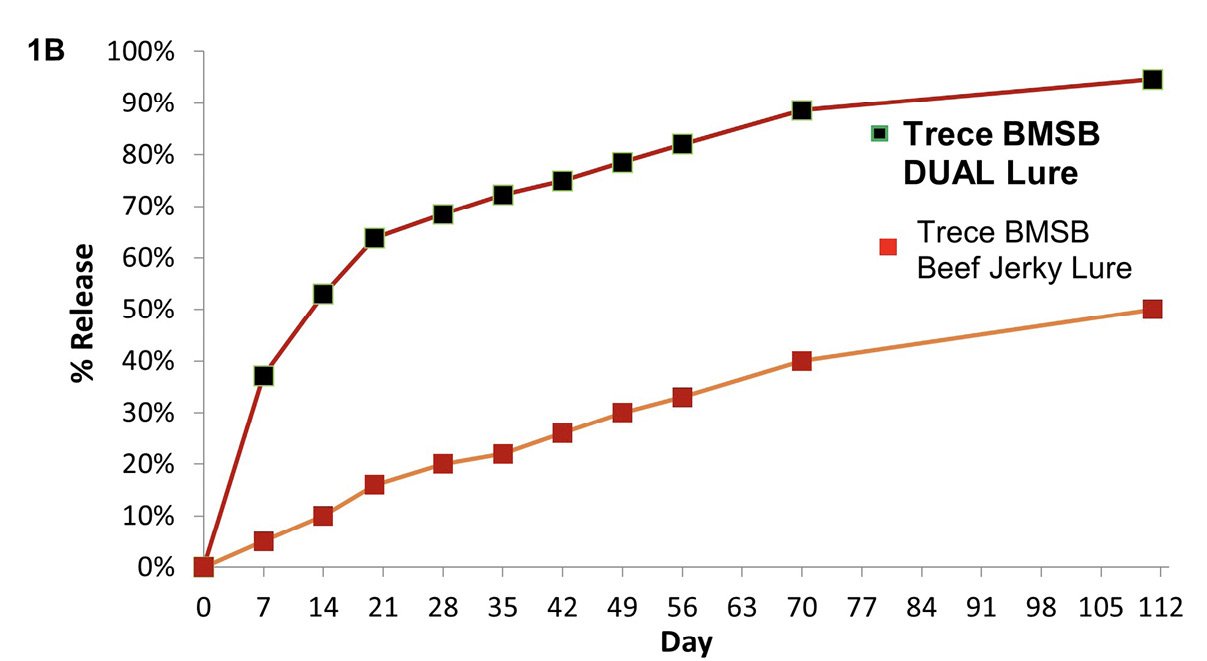 Figure 1A. Aging study showing percent (% Release on y-axis) of pheromone and MDT released from monitoring lures over time (days on x-axis) at a constant temperature. Once % released has reached 100%, all of components have been released from the lure. Pheromone components loaded into separate lures due to differences in volatility. 1B. Percent of pheromone released from current Trécé DUAL lure compared with unoptimized previous version of the BMSB lure. (Source: Dr. Vincent Chebny, Trécé).

In Georgia, BMSB was first observed during the 2015 season and significant damage to hazelnuts was reported during the 2016 season. Economic losses for Georgian farmers and exporters were more than 52 million US dollars (National Food Agency, Ministry of Agriculture of Georgia report November 2016). Pheromone baited traps are extremely useful in season-long monitoring programs when captured data is collected over the entire season. Reliable monitoring of BMSB not only determines geographic presence within a host crop, but also the population abundance and phenology over time. Many peer-reviewed studies published in high impact journals have reported results of studies looking at sustained BMSB captures over 12-week periods using the Trécé BMSB DUAL lure. A few key studies will be highlighted, and conclusions summarized in the following paragraphs.

A field study was conducted in 2017 by Murvanidze et al. (2018) to investigate the occurrence of BMSB in two hazelnut orchards in the Republic of Georgia. Monitoring traps baited with Trécé BMSB DUAL lures were deployed in the orchards in May, with the lures on the traps replaced every 12 weeks. Data collected shows sustained BMSB captures on the traps from May through the end of October.

Another study reporting on the first record of BMSB in Slovenia by Rot et al. (2018) used pheromone-baited monitoring traps for BMSB from April until November placed around orchards. The Trécé BMSB lures were changed every 12 weeks. Data shows BMSB were captured starting in the spring and continued through the late autumn.

In regions of north-western Italy Bosco et al. (2020) investigated dispersal to pheromone-baited monitoring traps in 2018. Baited traps were deployed in the field around overwintering sites, and lures were changed once after 12 weeks. Data shows the traps captured BMSB immediately after their placement in the field in early and mid-April and through the season.

Season-long monitoring of BMSB throughout the United States was investigated in 115 field sites across 18 states using pheromone-baited monitoring traps by Acebes-Doria et al. (2020). Each trap was baited with a Trécé BMSB lure and lures were replaced every 12 weeks during the field study. Results showed season-long captures of BMSB across all regions (Figure 2) and concluded that pheromone-baited traps are reliable tools to monitoring BMSB in different geographical locations with varying population densities throughout the growing season.

Figure 2. Average season-long captures of BMSB adults and nymphs on pheromone-baited traps in the field across five geographical regions of the US with BMSB DUAL monitoring lures changed every 12 weeks (Acebes-Doria et al. 2020).

Traps baited with BMSB DUAL pheromone lures have been used in survey and detection programs in new geographic areas when populations often are at very low levels.

An additional management approach is the attract-and-kill (A&K) tactic. In Georgia, a major campaign was launched utilizing the A&K approach as part of the fight against BMSB. Host trees were baited with multiple pheromone lures to attract BMSB and retain them until the trees were sprayed with insecticides. This tactic, in combination with intensive monitoring with pheromone-baited traps, proved highly successful in the management of BMSB populations in Georgia.